We all have a history 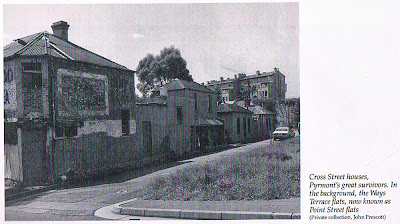 From 'Pyrmont & Ultimo - Under Siege' 1994. Available from good bookstores near you including Glebe Library.

Posted by gilbert grace at 06:03 No comments:

Email ThisBlogThis!Share to TwitterShare to FacebookShare to Pinterest
Labels: pastory

Fear of daath, fear of other people, fear of your own mind...

He gets it right when he says addiction is about regaining a feeling of control. Control is the myth used to sell cars and an economy based on false consciousness. Implicit memories, paying for the sins of our fathers...


Zeitgeist: Moving Forward, by director Peter Joseph, is a feature length documentary work which presents a case for a transition out of the current socioeconomic monetary paradigm which governs the entire world society.

This subject matter transcends the issues of cultural relativism and traditional ideology and moves to relate the core, empirical "life ground" attributes of human and social survival, extrapolating those immutable natural laws into a new sustainable social paradigm called a "Resource-Based Economy".


Published on 9 Oct 2012
Canadian physician Gabor Maté is a specialist in terminal illnesses, chemical dependents, and HIV positive patients. Dr. Maté is a renowned author of books and columnist known for his knowledge about attention deficit disorder, stress, chronic illness and parental relations. His theme at TEDxRio+20 was addiction -- from drugs to power. From the lack of love to the desire to escape oneself, from susceptibility of the being to interior power -- nothing escapes. And he risks a generic and generous prescription: "Find your nature and be nice to yourself."

“In such a context it hardly seems worth delving into the rivalries between the contemporary camps. Neither Capitalism nor Socialism can pretend to be an ideology. They are merely methods for dividing  ownership and income. What is most  peculiar for such theoretically practical methodologies, which are also theoretically opposed to each other, is that neither of them has ever existed, except in a highly tentative form. And even then they are invariably mixed together. Their mutually exclusive vocabularies have more to do with basic similarities than with differences. Like immature brothers, they have imposed their sibling rivalry upon us. The reality is that they are subspecies of the larger group which includes Christianity, Nazism and Communism, if for no other reason than that all of them prosper through the cultivation of desire, as indeed does Islam. Of the great world myths, only Buddhism is centered on the reduction of desire in the individual.”

In the spirit of Art and About let me tell you a story. It begins the day after...

Chloe booked for the randomner but had to withdraw at the last minute which left me free time to complete the install, there were still sketches to hang from the Rolling Sketch Tours. Thanks to those who participated the Accelerator Gallery is now filled with large and small sketches of Pyrmont. There will be more information forthcoming, on the works on display, the rationale for the research project, and preliminary results, during the Art Ride Seminar/Workshop next Saturday 12 October, 10 am - 12 noon. Please book online if interested in attending. We will be in the Accelerator Gallery, 6-8 Scott St, Pyrmont, adjacent the Light Rail cutting under Harris St, towards Elizabeth Macarthur Bay.

I created a map to illustrate how people could create their own rides and be Audacious!

There were 9 of us in all for the Rally Cat which was a scavenger hunt in sheep's clothing. Where do all the animal references come from I wonder? Actually a really fun event. We even convinced Sherryl to come for a short while on her glorious bicycle, used a few years ago in one of the Pyrmont Festival cycling events it has sat idle in the entrance to the workshop space until Bob decided to put some air into the tyres. I got footage of Sherryl's first attempts on the flat area at the front of the gallery. A seasoned pro returning to form.

The Rally Cat was morphed into the Rutty Snail Trail as all the clues refered to events, locations, or objects on the route. I attempted to use my smart phone to track the GPS of our route but the battery died half way through, another reason that I prefer human wetware to external hardware. Chris Virtue did have his GPS running and captured the route, minus the belly where the road was blocked for the anticipated crowds visiting the foreshore for some fireworks or something. 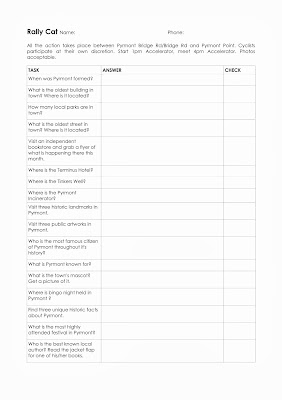 A bit daggy I know, but an excuse to get people on their bikes and thinking about their spatial limits, about data, place, social and environmental ecology.

We debriefed over a few ales in the local hotel and pondered the fate of the Terminus among other buildings that had been "land-banked" by Citilink.

The upshot is that we saw much contemporary and/or recent public art, the mystery of artist/title/year could not be resolved as most were not attributed. Conversely historical and engineering information was, by way of brass plaques, wayfinding and interpretive signage, in abundance. The skewed reasoning is largely a result of inverse snobbery? A hard one to fathom as the Arts And Culture industry is recognised as the fifth largest economic sector in the Australian economy,

Chloe Beevers, from the Local Government Association, in a recent SAMAG seminar stated that the creative industries are now recognised as one of five industries driving the Australian economy, employing more Australians that Agriculture and Mining combined.

We decamped from the pub to Accelerator Gallery for Opening Drinks and were joined by a few artist and cycling friends who came to help celebrate the show. It was during this that a good friend made a remarkable comment. He and his partner had come to the conclusion that I was the only person they could think of capable of violence. The remark was in relation to another context, replying to another's request for a bouncer for an event.

This took me aback and struck me as quite odd considering the accounts of violence witnessed and spoken of amongst our extended circle of friends and acquaintances. It got me thinking about the James Gilligan YouTube video where Gilligan is discussing his book, Why Some Politicians are More Dangerous Than Others. An illuminating read I am sure, the video below concisely presents the arguments.

Gilligan and others provided the rationale for this research project by accurately problematizing our pocket of contemporary Western culture which is reflected in the car-centric, technologically-dependent, anti-intellectual, anti-artistic, anti-democratic, and anti-elitist cultures of Sydney.

Apropos of the fireworks that were about to begin, was my friend implying I was capable of participating state sponsored murder? Would I look good in fatigues? Or, was my friend implying that my education was and is a sham? That my education provided me a false sense of self-esteem and and denied a route to non-violent means of regaining or retaining my self-esteem when faced with the incessant, competitive attempts to out-psyche me through dialectical means?

There is no answer. It is the Freud vs Jung dilemma writ large - ego up or ego down? The oppressed siding with their oppressors preferring their comfortable chains to uncomfortable freedom.

Paraphrasing Humphrey McQueen in Suburbs of the Sacred, it is a fact of life that an artist must cope with, deal with, and cross the paths of many such "demons" throughout their working life.

Posted by gilbert grace at 16:43 No comments:

Email ThisBlogThis!Share to TwitterShare to FacebookShare to Pinterest
Labels: the mirror

Tick of the heART

Weather is looking cooperative for Saturday's events, if you are in town and not being dragged off to other events, apparently a few social gatherings this weekend, come join us at Pyrmont for some convivial cycling.

BoM gives its tick of the heart approval.

Patchy fog early in the morning. Mostly sunny afternoon. Winds north to northwesterly and light tending west to southwesterly 15 to 20 km/h in the late afternoon then becoming light in the evening.

Posted by gilbert grace at 05:08 No comments:

Dean Mason, Martin Griggs, Simon McMillan and Dan Butler said they 'like to do our bit here and there'

The four good deed revellers who stopped to drunkenly fix a bike rack at 3am will be given an award for their 'public-spirited' actions, councillors said today.

Footage swept the internet yesterday of the group emerging from a takeaway in Boston, Lincs, after a night out and stopping to wrench the damaged rack back into position.

The men, dressed for a night out and holding takeaway food, spot the damaged metal hoop and decide to put things right with a good deed.

Refreshing CCTV footage shows them work together to yank the black bike rack back into shape.

Dean Mason, Martin Griggs, Simon McMillan and Dan Butler spent several minutes working the rack back into position, before having a congratulatory team hug and high-fiving for a job well done.

As Boston Borough Council said the group would be rewarded for their actions, the modest lads said they were 'shocked' by the positive reaction to the footage...

This video sparked off an interesting debate on facebook which illicited from me some factoids regarding (public) drunkenness. Especially relevent in the Australian setting, and Sydney in particular, where "alcohol" is blamed for all manner of bad behaviour.

Email ThisBlogThis!Share to TwitterShare to FacebookShare to Pinterest
Labels: alcohol

Newtown based artist and SCA MFA candidate Gilbert Grace is undertaking a residency titled 'The Common Wheel' for Culture At Work in the Accelerator Gallery, 6-8 Scott St Pyrmont, from 20 September to 20 October 2013. This is number 8 out of 10 residencies in the 2013 Culture at Work program, http://cultureatwork.com.au/#/ideas. 'The Common Wheel' also features as part of the Art And About 2013 program, http://www.artandabout.com.au/festival-program/the-common-wheel/

Posted by gilbert grace at 22:39 No comments: